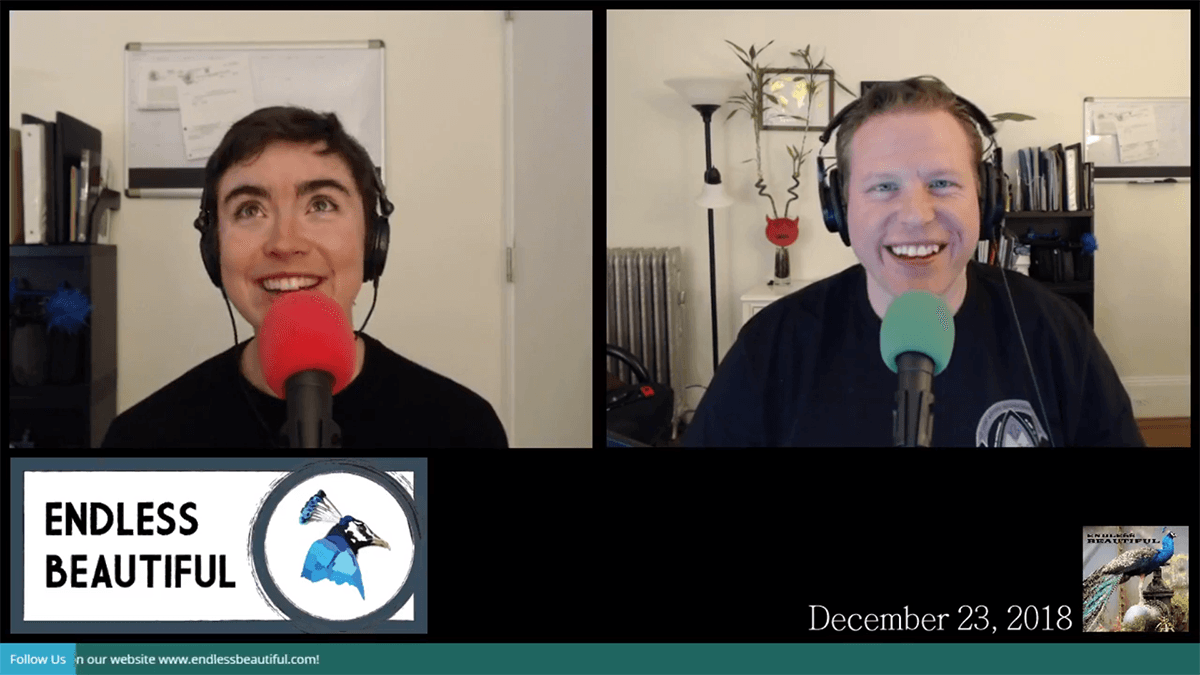 We use Session 52: Snow for this workshop. Carolyn writes a piece of fiction that questions inspiration, imagination, and dreams. Lucas writes a story about a not-so-distant future where virtual reality provides the ultimate escape. What will be the consequences for our society when this happens? Also, send your recordings to add to the new EB Radio station on our website!

The hatchway door opens. Cool air rushes in sudden and stale, displacing the swelter of the underground. From inside the tunnel, the engine whirs. The guide lights flicker on in succession. Spray jets coat the opening with ice, and workers rush to buffer smooth the launch pad. The pod races up the chute, quicker than can be heard, races into the distant sky, known only as a dim comet tail flash escaping the horizon. Another farewell song blasted off-planet with the tourists inside frozen in sleep.

I miss birds. This off-world appeal didn’t prepare me to ignore the cravings for things I didn’t realize I’d cared about. Sure some people have their holograms, VR. What you don’t predict is that, without the exposure to all those subtle things in life back home, you don’t even dream about them anymore. Marty says you can only see what you’ve seen, but I guess the subconscious starves without proper feeding like anything else. Maybe I’m must jaded.

Maybe I just don’t have any imagination anymore. Left it behind. Looked down into the dark tunnel one too many times and stopped seeing dragons swarming down there. Just mechanical gravity. Launch pads. Landing straps. I guess I figured we’d find something unexpected all the way down there. I remember what we feared–but we just didn’t find it.

The door swung open slowly. The hinges creaked and the frame moaned under the weight. Humidity had swollen the wood, malformed it so much that Alex had to lift the door in order to latch it. What a shithole. His apartment. He’d been there for six years now. Hell, the heat hadn’t worked at all during the winter for the first two years, not that Alex would have known enough to do anything about it. His mother had stopped by—one of her bi-yearly visits, told him that he better call the utility company or she was going to call the cops. Alex’s mom told him to stay off the dope. He’d never done drugs. Never drank. Maybe popped an Adderall from time to time to boost his focus, but that was about it.

So yeah, Alex got his heat turned on, but that didn’t mean much for him in the middle of August, sweating like a pig in his shitty apartment, fogging his headset lenses to the point that he had to constantly wipe them dry. His mom had been wrong about the drugs, at least the ones that you shoot up or dump down your throat, his drug of choice was virtual reality.

Alex wiped his lenses again and his brow. He pulled the visor down and found himself in a beautiful spring scene, complete with a line of blackbirds on low wooden fence, a spring mist coming off the hills, and enough moisture and cool relief to make him forget about the infernal reality that his body was currently buried in.

Almost. Sweat was dripping down his cheeks so much that they soon filled the eye wells on his VR set. He pulled them off again. “For fuck’s sake!” yelled Alex. He looked over and realized that his door was still open. Alex set the VR set down on his desk and walked across his apartment, through the pizza boxes and coke cans, to close it. He grabbed the handle, picked it up, and locked it firmly.

To live was to suffer. This existence that he was forced to revisit every time he was outside of VR was pathetic compared to the one that he had carved out inside it. Alex had been an early adopter of the technology, so he had made a name for himself in the circles. In the beginning, it had been novelty jobs like mowing someone’s virtual grass, or perhaps walking their virtual dog, never anything gross— nothing sexual or hyper violent. Alex was above that, the tech was beyond that, VR represented a new beginning for humanity, and it was pioneers like Alex that were pushing it forward.

He put his headset back on.