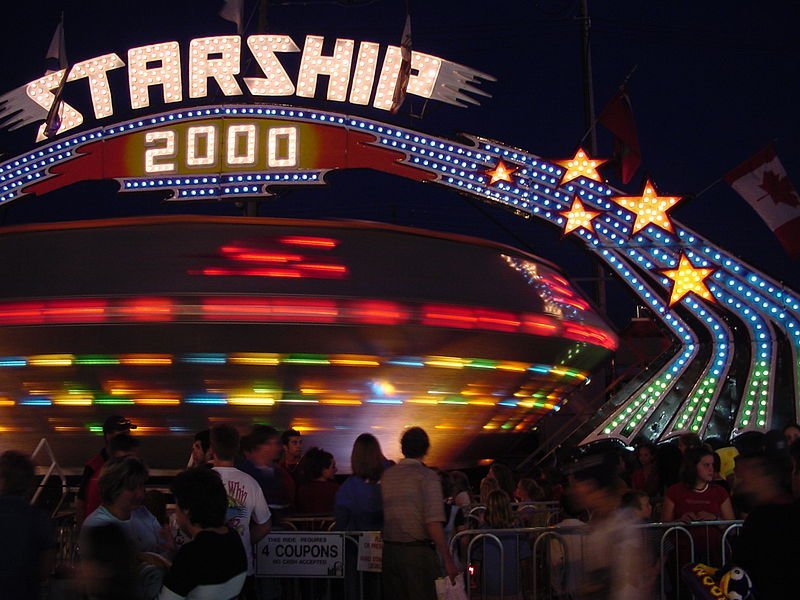 Brent Gerlach is a community art organizer based out of Madison, WI. He started the arts group Geswerk in Madison and later took on roles with 100 State and Dane Arts. Brent’s large installation featuring picture frames was brought to the Electric Forest music festival where it was enjoyed by tens of thousands of attendees!

He is currently working on BG Creative which is:

Available for web design, branding, and creative marketing services, with specific emphasis on enhancing the economic infrastructure of the arts.

James found himself in an interesting predicament. Small town carnival. You know the type – Funnel cake, bumper cars, bobbing for apples, and half-dead goldfish. A fine Saturday afternoons fun by even the most pessimistic of folks.

His trouble began shortly after the ferris wheel. No it hadn’t rained and he hadn’t eaten bad cheese fries. That was the year prior.

So he was walking from the ferris wheel, a bit lame and not nearly as exciting experience as he remembered, and passed by this strange looking fellow digging in the blue rubbish bin for half-full beer cans, when the guy popped up, thick brown, pop soda bottle glasses so thick you couldn’t even see his eyes anymore, and the guy said, “hey bucko, you got any tickets?”

Damn rides cost too much these days,

James knew this to not be true, but the crazy, half-blind fellow had now dislodged himself from the blue bins and had wrapped his arm around his shoulder.

Ripped drunk winkel pointed to this large, spinner saucer thing that looked like it was straight out of the seventies. You give me a ticket son, and we can go on the Gravitron…together. We’ll travel through time man…Viking princesses and aquatic sheet metal sheep.

James tried his best to jerk himself away and run, but he felt a pinch in his lower back.

I’ve got a shank, and I’ll cut your kidneys out, you two bit punk. I know you’ve got enough tickets to get us where we need to go. Now hand em over and follow me before I drive this raven’s beak into your liver.

James began to shake and unsteadily made his way to the Gravitron line. There were 2 small children and one young teenage couple making out in the line. The attendant was opening the gate in quiet despair.

One word bucko and I’ll cut your pecker off and feed it to the mutants.

James slowly pushed forward and when it was his turn he said, Two please.

There was no eye contact, just a motion to get on.

Billed out broken wagon pushed James forward and motioned for him to rest again the padded wall. Now stay close, he said in James’s ear. This is going to be a wild ride. There was the quiet swoosh of the hydraulic door as it shut.

Wind rushes out of the lock,
the keyhole and the pupil,
the rushed swirled contraction
and the breath caught,
the cyclone – the centrifuge
the pinned breast – the curled toe
until the loosening seems impossible,
and the nail in the door is fixed,
the spare key swallowed –

In all chaos there is such an eye,
a hurricane or a charred stack of newspaper –
in all places there is a center.
The eye is not the center of the body –
no the center is the focus.
When the eye is shut and the hands do the looking
the focus is tenfold – if ten times less trained,
even the fold between the fingers is rich
in its complexity – focus worthy. Each cell a mind.

Mind the drop. Mind the pattern on the metal,
the cloud and its flute making, a gutter drum,
the patter of a storm breath said this way now
and never this way again, each swatch of rain
a conversation between the looker and the locked,
the sky and the soil and all the same anyway
because even the weather is fixed in itself and
prone to change – an axiomatic contradiction,
a vocabulary of noise and only time for translation.

I tried being a bird today.
I tried a feathered wind.
Nothing extraordinary happened,
but many delightful things did.

There is a wind inside the lock,
a screw loose on the hinge,
a roar inside the raindrop,
a center moving in.

Tighten up the focus.
Widen out the edge.
A storm knows no horizon
A bird flies from the ledge.