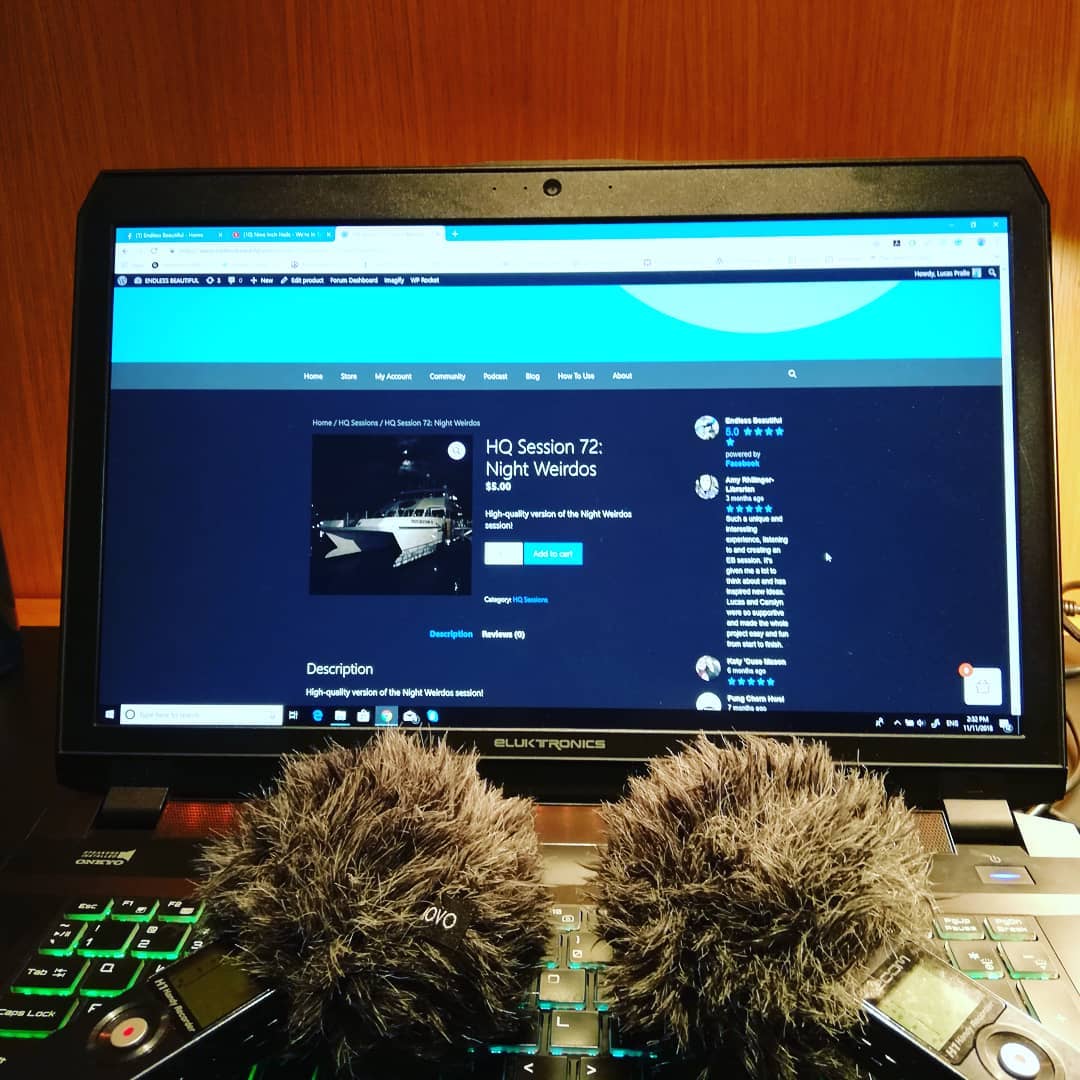 Here is our livestream from Sunday, November 11 at 7 pm EST! We debut a new session here: Night Weirdos. What’s up with the name you ask? Well, Carolyn and I are often weirdos wandering around making and recording noises in the night! The strange looks we receive are half the fun! We have the video and audio versions of the livestream below.

It had been running all night, and they were running out of gas. Luis was the last one to use the can. That was two hours ago. He estimated there was maybe a quarter left. Then they’d be out of light. This wasn’t a matter of discomfort, though. Sure, there would be a chill when the lights went out with the generator, but the light was also keeping the creatures out in the forest.

Luis had signed up for this surveying trip in hopes of finding some solitude. There were only three in the camp. He had just gone through a bad breakup back in Seattle. He was decided what to do with his life. Was grad school next for him? Would he move to the east coast to where his sister was living. The past few months had been filled with him asking those questions repeatedly, walking around aimlessly, never getting any closer to the answer.

That’s when Luis had read the advert in the newspaper. “Surveyor Assistants Wanted”. The pay wasn’t that great, but it wasn’t nothing, and the requirements were that you had an able enough body to carry up to 50 lbs and could spend a few weeks out in the Northwestern forest.

There were two other men in the crew. Ben, a huge stoner, and his complete opposite, Larry, the high-strung disciplinarian. Ben was out here trying to score money for weed. Larry had signed up for the trip to condition his body for the coming apocalypse.

Luis was somewhere in the middle. He thought the trip could be constructive, but he was also just trying to escape, to allow his head to clear a bit. They all seemed to be accomplishing what they had set out to do until the third night.

Luis woke up to a loud siren. He thought it was a smoke detector in their cabin at first, but after they all searched around for nearly thirty minutes, they realized that the sound was coming from outside. Luis had grabbed a flashlight and followed the blaring siren to a shed out back. He had opened the door to reveal a peculiar machine, about the size of a shop vac, sitting on a concrete slab.

There were various lights going off on the top, and the sound was deafening. Luis attempted to turn it of by finding a button. They eventually got desperate and began mashing everything in sight.

Lanky Ben hit something. The siren went off. The relief that they were feeling didn’t last though. Another more terrifying noise began emanating from the treeline around the cabin. It sounded like some sort of large bird. It was loud. And whatever was making the sound, sounded big.

The three of them had started running for the cabin when hidden speakers sparked to life with a shot of distortion.

The tile was red–the door composite wood,
hollow–one time when we left the dog
in the garage during a thunderstorm
he nearly clawed and chewed his way through it.
There was green pile carpet for a while,
and then a more modern, thinner, sandy mosaic,
the whole room done over like the desert southwest.
We had two hammocks, one canvas, one nylon.
We didn’t have a windchime, but we did have a piano.
The top panel could come off, reveal the internal hammers,
and let the whole house get loud.

There was a bulge in the drywall from a bullet,
or so I was told–maybe it had just buckled,
a weak spot either way. The water table was high
so the ground was almost always wet,
and whenever somebody flushed the toilet,
the sump pump would bubble up from a buried pipe.
The soil was almost all silt, so dark
and dense, held together so closely
that it couldn’t grow carrots, wouldn’t let
a root like that grow straight,
but some years it allowed pumpkins, trailing
runners over tracks of the rototillers.

The fort in the back got pulled over
to the neighbors after we outgrew it,
stood by two willows instead of an elm,
the elm came down too, but its stump grew sprouts.
There were toads in the lilacs.
There were dinosaurs in the basement.
There was a rocking horse that rocked on its own.
One time I snuck out but I just used the door,
never did climb out the window
the way I expected I’d need to–
the house never did burn down
and we never had to gather by the basketball hoop,
clutching a photo album or a blanket.
We were free enough, each of us to leave it,
and I don’t think any of us have been back.
Maybe drove by it. Moved on.