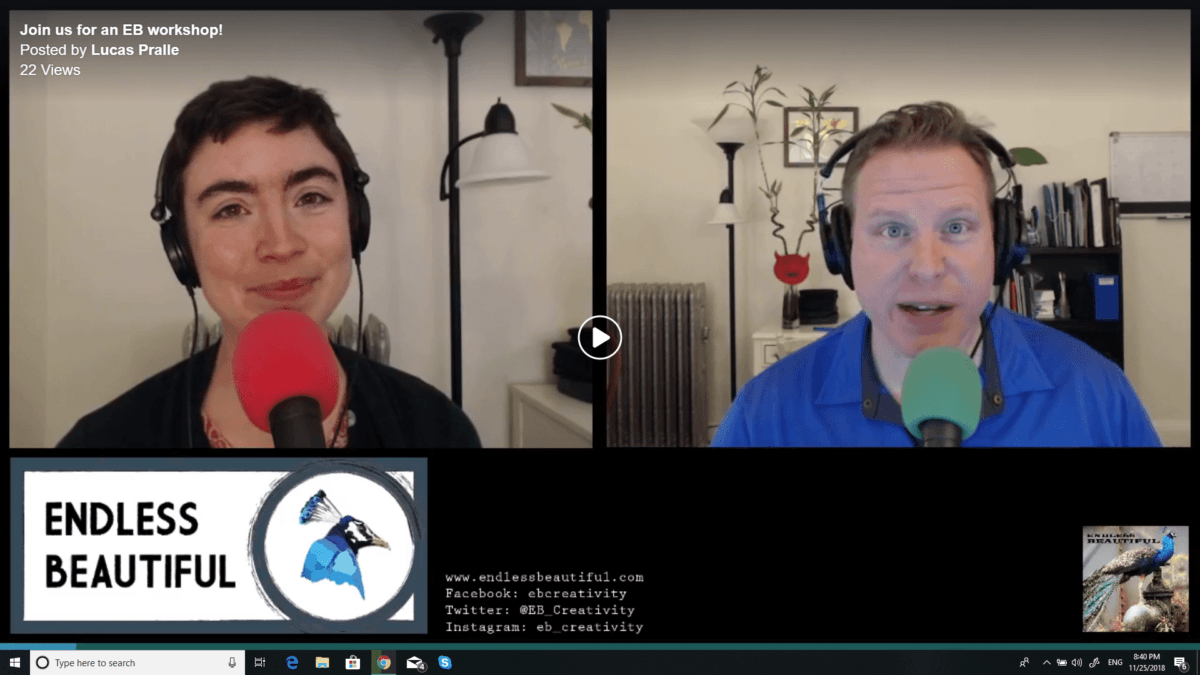 We chose Session 43: Jar of Treasures for this workshop. Watch and listen as Lucas pens a story about a mysterious man and his journey around the country. Carolyn writes a poem about the importance of creating and maintaining shelter…and knowing when to leave it. We have the video and audio versions of the livestream below.

He didn’t know what he had been walking for anymore. The soles of his shoes were worn out. His jeans were shredded at the bottoms. His neck had been sunburned so many times and had peeled so massively, it was thick like the hide of a bison. He’d been at it for 25 years. That’s right, this wasn’t a weekend jaunt, not even a summer hike, this was a multi-year, multi-season, walk, and he wasn’t sure why he had started.

At this point in time, he had managed to make it to Vermont. The flies were terrible. The birds, beautiful. I had rained an hour prior, now he trudged along the side of the road in the gravel with soggy socks and shoes, cars whizzed past. The passenger in the last truck had tossed a cigarette out the window. What a loser. Even he knew that it wasn’t cool to be smoking anymore, and he’d been in the elements, walking both in society and outside of it, for the past 25 years.

For every transgression, there were 10 wonderful things that happened to him. A few weeks ago, a blue-haired woman had brought him a piece of apple pie. She had spooned it into his mouth as he walked. She told him about the cardinals that were out by her feeder and about her grandson and his video games. She needed to talk. He liked the pie. It was a good thing.

He wasn’t always on the roads. He had special permission. Was that how this thing had started off 25 years prior? He got an idea for a fundraiser, or something like that, he wasn’t sure exactly why, all he remembered was passing by a carnival in Alabama, and the sheriff driving up and handing him a paper. The sheriff told him that he could walk anywhere that he pleased, that the President had even signed it, so he’d been doing that, but he wasn’t exactly sure why.

A few months ago, in Texas, he had crossed through some farmer’s field, brown cows watching him, mashing tall grass between their teeth. He had crossed a barbed wire fence to find a farmer with a shotgun waiting for him.

“You’re on my property, you goddamn fool,” said the farmer.

He produced his pass, and the farmer turned white. “My apologies! Let me clear the trail ahead for you. Please, don’t tell them about this. I’m just trying to protect my land…I’m sure you can understand.”

He couldn’t understand, because he couldn’t remember exactly why this had all started—just that he needed to continue to do it. So he walked. And he supposed he would walk until his feet fell off, and the birds would steal his flesh, and his bones would be bleached in the sun. He wondered if another man, woman, child, or animal would come upon his bones, and he wondered if they would remember why he had started this thing in the first place.

We’re all looking for shelter,
looking to uncover someplace funny,
but home like–some island
sliding over the surface of the ocean,
a place inverted in the mirror
where a chip broke out of the glass
and the reflection became less
a reflection, having broken and fallen off,
and more of a brother, someone
easier to accept for their flaws—
even love them for them.

If that shelter takes the form
of a bottle someone long ago
cast into the woods, and now
some squirrel has filled it with acorns,
make a fire by the mouth—
you’ll need water to boil, but
that generous seed can be pounded
into a meal, and you’ll have not only
a place to sleep, but food,
and warmth–what more can you need.

Put your fingers in there,
mind that you don’t shock them red,
remember the numbers and letters
of the spell. Once you’re inside,
you’ll have to figure out how to
get out of there. Make it stop moving.
Pull back on the springs or the
lever, and puzzle your way through.
Any shelter worth its measure
can stand a little stretching,
but you’ll want to ensure you’ve got
at least two doors, an exit plan for either.

It’s fundamental to survival: shelter—
need it to go on living, but,
fully worth belaboring the point,
you need a way out. You can’t need it
so bad that you get stuck.
A spider doesn’t get caught in its own web
and get out. Birds leave their nests
and only rebuild when the season is right.
A sense of home is episodic,
and getting lost is the only way
to enrich the journey. So wander,
take shelter in wisdom instead of worry,
and don’t stay there too long.