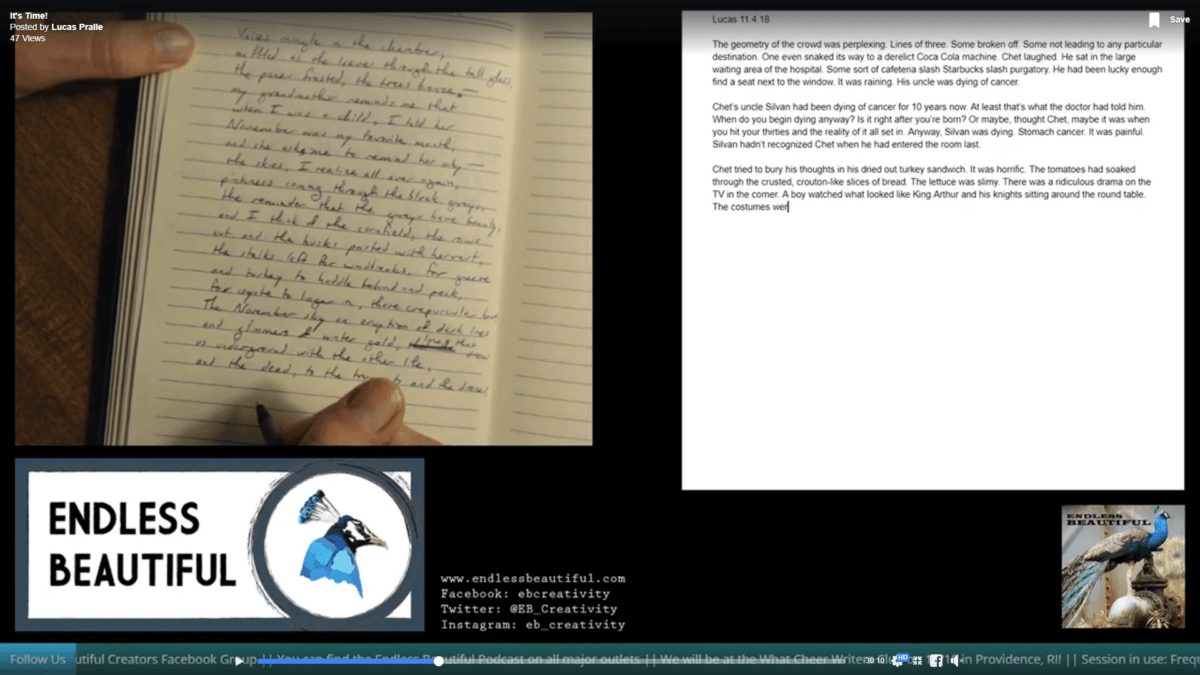 We kicked off our first FB livestream on Sunday, November 4 at 7 pm EST! Members of the Endless Beautiful Creators Group chose our Frequency Workshop 4 session as the one to be used. We have the video and audio versions below.

Voices mingle in the chamber,
muffled as the leaves through the tall panes,
the glass frosted, the trees bronze–
my grandmother reminds me that
when I was a child, I told her
November was my favorite month
and she asks me to remind her why–
the skies, I realize all over again,
pinkness coming through the bleak grays,
the reminder that the grays have beauty,
and I think of the cornfield, the rows
cut and the husks parted with harvest,
the stalks left for windbreaks, for geese
and turkey to huddle behind and peck,
for coyote to linger in, those crepuscular hours.
The November sky an eruption of dark lines
and glimmers of winter gold, lines that draw
us underground with the other life,
and the dead, to the trumpets and the drones,
still some things flower, witch hazel yellow
as the wings of bittersweet berries, capsules
of the entwining vine, the burst of color,
all the more poignant for the contrast.
WIth all this background, all the leaves
to shuffle through, all this material
to pack amongst our living, what better
joy than this intermingling, the backwardness
of remembering, the decision of revision
or remainder–she knows these pieces of me
that I do not, my babyhood, my spring,
but we live together in these seasons–
we visit, I ask her things I have asked
before, or that I haven’t, and the sky
burns a new tint, a flame of cloud appears
that might’ve been there before, but went
unnoticed, now lingers over the field
and the valley, becomes known, and shifts again.
I could call it back, recall its hues,
its pattern, bring it in me here to earth,
to store down in my roots.

The geometry of the crowd was perplexing. Lines of three. Some broken off. Some not leading to any particular destination. One even snaked its way to a derelict Coca-Cola machine. Chet laughed. He sat in the large waiting area of the hospital. Some sort of cafeteria slash Starbucks slash purgatory. He had been lucky enough to find a seat next to the window. It was raining. His uncle was dying of cancer.

Chet’s uncle Silvan had been dying of cancer for 10 years now. At least that’s what the doctor had told him. When do you begin dying anyway? Is it right after you’re born? Or maybe, thought Chet, maybe it was when you hit your thirties and the reality of it all set in. Anyway, Silvan was dying. Stomach cancer. It was painful. Silvan hadn’t recognized Chet when he had entered the room last.

Chet tried to bury his thoughts in his dried out turkey sandwich. It was horrific. The tomatoes had soaked through the crusted, crouton-like slices of bread. The lettuce was slimy. There was a ridiculous drama on the TV in the corner. A boy watched what looked like King Arthur and his knights sitting around the roundtable. The costumes were cheap. The TV was one of those big ones too. It sat precariously on an aluminum stand three feet above the boy. It would crush him in an instant.

Chet’s mother entered the cafeteria. Silvan was her brother. His mother was strung out. She had been sitting in the hospital for the past week. She’d been putting this thing off for five years now. Silvan and the whole family had. They knew it was a matter of time before he ended up in the ground. Until they’d spend a week, not being able to console one another. Until Chet ate this terrible sandwich. It had to be about him, didn’t it?

His mom sat down. She was pale. No makeup on her face. Her hair was tied back in a haphazard bun. It hadn’t been washed properly over the past week and looked like a rusted coil of barbed wire. Chet watched as she went to a dispenser and slowly filled a styrofoam cup with burnt coffee. He knew it was burnt because he had choked a cup down himself.

“How you doing?” asked his mother.

Chet shrugged. He looked back up at the TV. Somebody must have changed the channel. Some sort of cooking show now. A woman was feverishly beating the side of a metal bowl with a spoon. A crazy glint in her eyes. Chet wondered if it was for the dish or the ratings.

“Terrible,” replied Chet. He tried to drink more coffee, but he quickly pulled it away from his lips. It was so dry, it was like drinking sand.

“Yeah.” His mother dropped her head and studied the dirty floor beneath her socks. She gave up on wearing shoes on day two. Chet figured it was an attempt to feel at home. He doubts it had worked.

“Did he say anything else?” asked Chet. He didn’t know what else to ask his mother. He could try to dig through the emotions of the week, but they were still in it.