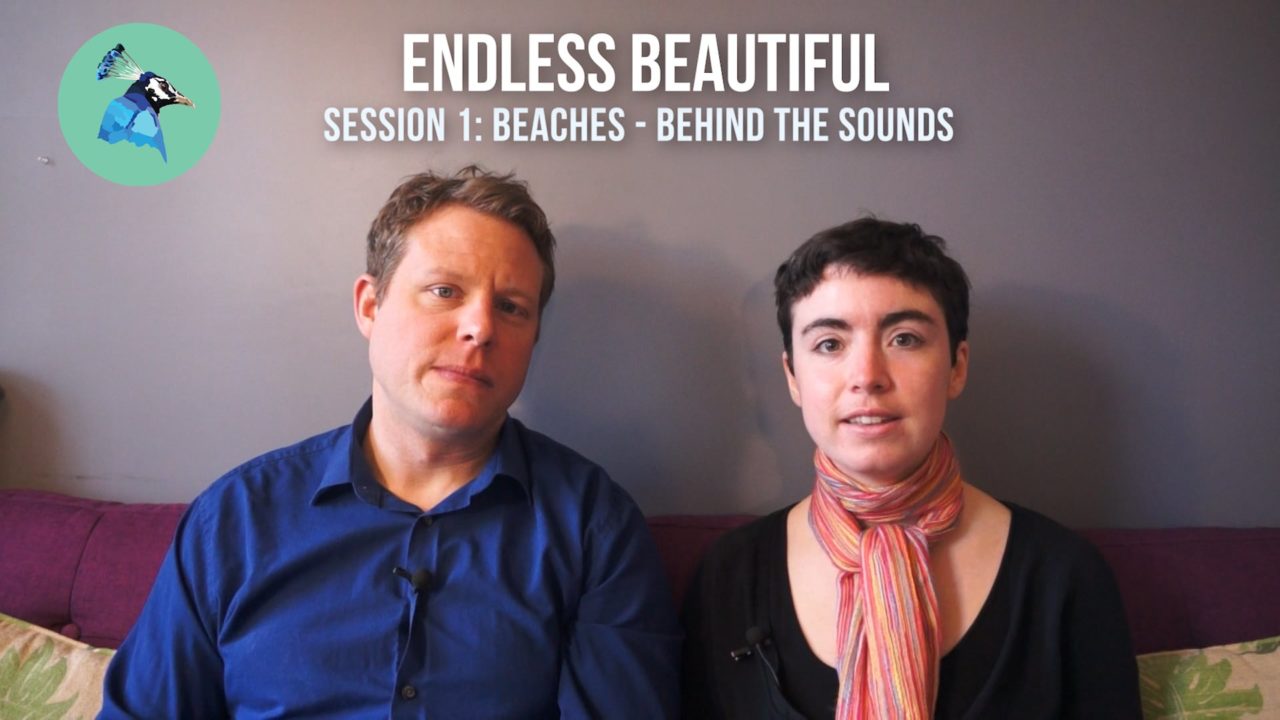 1st installment of our new video series Behind the Sounds! This one covers the very first EB Session: Beaches along with the origins of EB! Enjoy. You can find Beaches in our store at endlessbeautiful.com!

EB Behind the Sounds
Session One: Beaches

Hello, this is Carolyn Decker. And I’m Lucas Pralle. So, this is Endless Beautiful behind the scenes, the making of our Sessions. We began with Beaches.

August of 2016. Carolyn and I had been talking about setting up a writing contest or something like that. We as writers we wanted something to help us be more creative.

A little more disciplined too. We needed a practice a could rely on. A method we could use. We knew we liked using sounds. Lucas had a background in podcasting and you had collected some sounds while you were abroad in China.

Yeah, I did. So when I was in Suzhou China we were doing a podcast called Worm Island and we had gotten a Zoom H5 recorder. It was this really nice portable recorder and I started to go around and collect sounds. One of the sounds from our sessions, beaches, is “Busy Chinese Street.” And that was me taking the recorder outside of my apartment and going out on to the corner and just recording for a few minutes. The idea was just to have a sound bank at that time. Wasn’t the prompt or anything. that hadn’t been formed yet. So I had that and we came back to the U.S. and we thought, how can we be more productive?

Yeah, so at that time we were living in North Kingstown, Rhode Island and we lived pretty close to this nice town park and also not too far from the state beaches. So I think we went into the woods first and we just collected some sounds of walking in the woods, some rustling of leaves… Then we went to the gas station on our way to the beach. We got the sound of the gas station background, and then the waves, the tide coming in, walking on the beach… Those also made their way into that session.

So after we got back from recording these things… Also, that was the first realization that hey, this is a lot of fun, going out and recording these things. And also for us as artists, that was the beginning of our art collecting the sounds and putting that together. Well, we took it back to the computer and I opened up some audio editing software. We didn’t have a time period, like how long the session was going to be. We hadn’t determined those things yet.

Well no but 15 minutes felt doable, a solid amount of time.

Right. And that’s what we had. Let’s see, we had one two three four five six seven eight: eight sounds that we had in there. A little under two minutes probably for each one. So I put them in there and we started writing. And, really, that first go at it was very similar to the EB Sessions that you will hear in 2018 and beyond.

That structure has really stayed the same throughout these first couple years of doing EB together. It seems to just take on a life of its own. It has that framework, but the life that we try to put into it in the collecting of the sounds, and then the life that our participants put into it when they use it to create something, really has made it this living creature.

Right. Right. I guess one of the reasons why we wanted to do this was that we have memories from, not only when we’ve used these for workshops or for our own creative prompts, but also when we were out recording these things. You know I remember when we were at that gas station. If you listen to the Session, if you go to our store on our website, and you purchase the session you will hear this too: the clunking of the pump. Stuff like that. Up until that point I had never really paid that close attention to those details.

It’s true. I mean, going out and having the recorder in your hands, and knowing that it is listening to everything that you are hearing–it really tuned my senses to my surroundings in a way I had never really paid attention to before.

But there are also audio challenges. When we’re on the beach and the wind and the waves are rushing in, that created a lot of difficulties. How do we capture the sound we want to capture in its natural context without destroying the sound through that interference? So we’ve learned some lessons about how to get around those field challenges.

And also our subject matter too. The sounds that we record. What we choose to record. How we arrange those in the sessions. That is always changing. We have a story behind many of those decisions and all the funny weird places that we’ve found ourselves throughout the recording of this.

So that’s what we’re going to be doing with this video series. This is Session One: Beaches which you can find in our store. It is the first EB Session. It’s a good one. At the time of this recording, we have 66 Sessions. And we’re going to do a video with some behind the scenes stuff for every single one of those because there is a story behind every single session. And we’ve been there. Every step of the way. We’ve recorded every single one of those sounds. I think we’re over 400 sounds now.

All those different soundscapes! I guess the thing that has been becoming more and more important to me is the realization that all these sounds (and we personally record every single one that we use in our sessions…) It has become this fascinating record of our experiences. Then, that is this engine for the art that is created through listening and building upon that. So I guess, if you ever get stuck you can try to wonder what the heck they were doing when they were recording this.

Ok! Well thanks for spending some time with us. Check out that Session: Beaches on our website endlessbeautiful.com. And we’re gonna see you guys again soon. Thanks!